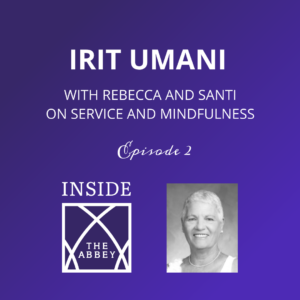 The Abbey at St. David's
Inside the Abbey with Irit Umani on Service and Mindfulness

In Episode 2 of Inside the Abbey, Rebecca Hall and Santi Rodriguez interview Irit Umani about spiritual commitment and service.

Irit Umani, the Executive Director of Trinity Center, a faith-based organization conducting programs that serve the spiritual, emotional and physical needs of the poor and homeless in Austin. Before moving to Texas, Ms. Umani lived in Berkeley, California, and she is originally from Israel. For nearly 20 years, Irit has lead organizations working with survivors of domestic violence. She has many years of professional experience serving people with needs for assistance, both as Executive Director and as Program Director. Irit says her work is based on and stems from a spiritual commitment for service. In her spare time, she keeps a practice of silent meditation and is deeply fed by being in nature, preferably with friends.